Perhaps the most G-Star of jeans is the G-Star Elwood – the first pair constructed to the 3D Denim method. Unlike traditional patternmaking, which approaches the garment as a flat object, 3D Denim employs techniques that sculpt the jeans around the wearer.

Created in 1996 by Head Designer Pierre Morisset, the concept came to him at a rest stop in the South of France. A passing motorcyclist was riding in his jeans, which had formed to his riding position through long time exposure to the elements. Intrigued by how the jeans had clad around the motorcyclist’s legs, Morisset sought to recreate the 3D shape of those wet, solidified jeans, giving birth to both 3D Denim and the G-Star Elwood jeans.

In anticipation of next year’s 20-year anniversary of the G-Star Elwood’s invention, this season G-Star introduces an updated version of this icon: the 5620 3D Zip Elwood. Inspired by the pants used in GP motorcycle racing circa 1960’s (the era of Mike Hailwood), with zippers at the knee to house removable protection, the 5620 3D Zip Elwood brings this detail to its right knee. Available in both men’s and women’s versions, the black jeans are resin-coated, baked and then heavily washed-down – a treatment that pays tribute to Morisset’s original inspiration.

The G-Star RAW Autumn/Winter ’15 collection is available online and in-stores as of September 2015. 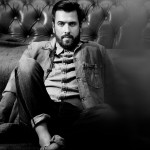